Melbourne Watch Company Review: Hands On With The Carlton

Disclosure: This is a sponsored post containing affiliate links. We received compensation and courtesy product from Melbourne Watch Company in exchange for our honest review only. All opinions expressed here are our own. Learn more. 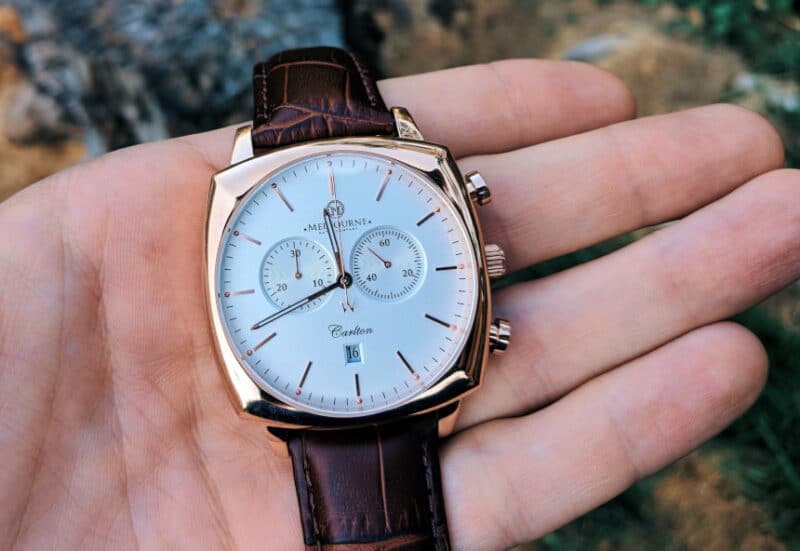 Bottom line: While it sits quite large, there’s a lot to like about the Carlton by Australian watch maker, Melbourne Watch Company. Its high-quality design and specs offer great value for money, while its themed elements work to creatively bring the city of Melbourne to life, right there on your wrist.

I’m fortunate to have visited Melbourne, Victoria a few times in my life.

It’s a cool city, and up there as one of my favorite places in Australia.

To paint you a picture if you haven’t been, I’ve heard it referred to as a ‘mini New York City’. I mean, the fact that ‘Melbhattan’ is a word that has been printed online says something.

And you know what? I can see the connection.

The diversity. The SoHo-like laneways. The speakeasies. The growing coffee standard. The 24-hour energy.

I bring up this comparison to give you a sense of what Melbourne is all about.

Because Melbourne Watch Company is all about Melbourne.

What Is Melbourne Watch Company?

Melbourne Watch Company (MWC) is an Australian watch company based in (you guessed it!) Melbourne, Australia.

From the company name—to the name of each collection—to the iconic landmarks on the case backs, the city of Melbourne is the leading influence on the brand’s designs.

And because of MWC’s attention to detail, that influence comes through as clear as the sound of a tram screeching to a stop on a cold Autumn morning.

Fun fact—Melbourne operates one of the largest tram networks in the world. And let me tell you, they were a Godsend when I was there as a pathetic tourist. Yes, I nearly got hit by one (it was only once), but they saved me from getting lost at least 11 times.

Why don’t more cities have trams?

Melbourne Watch Company was founded in 2013 with a simple goal – to create premium grade watches that would be accessible to watch enthusiasts, casual collectors and beyond. – MWC

Each watch is designed and assembled in Melbourne. Their showroom and workshop is in the inner city Melbourne suburb of Carlton.

And here’s another one for you. The Carlton just so happens to be the name of the model of watch I’ll be reviewing.

What Are the Differences Between the Classic Rose and the Black?

The Classic Rose version features a rose gold plated case and a brown leather alligator strap, with a cream dial. The rose gold is also accentuated on its hands, crown, pushers, markers, and buckle.

On the flipside, the Black version is all about the classic black/silver dynamic. It boasts a black dial with a black leather alligator strap. It has a stainless steel case, as well as silver hands, crown, pushers, markers, and buckle.

My Carlton watches each arrived snugly packaged in a black square wooden box within an outer cardboard box shell.

The box is hinged, with a stainless steel push button lock.

Opening the box reveals a model specific owner’s handbook and cleaning cloth tucked into the top of the box.

The watch was seated on an ivory cushion with the time and date set accurately to Melbourne time. Classy.

I’ve gotta say, I’m impressed with the quality of the box.

I like that MWC have paid attention to that, it makes for a good unboxing experience. I’d be very comfortable gifting one of these in their stock box.

Onto the watch itself and the Carlton has a 42mm diameter cushion case made from 316L Stainless Steel.

It has a lug to lug length of 52mm and a height of 11mm. The thin width allows it to fit under a cuff pretty nicely.

To me personally, the Classic Rose version appears a little bulkier to the eye than its Black counterpart, and that’s probably down to the darker version’s more subdued black/silver contrast.

The watch weighs in at a lightweight 77 grams. It feels good on the wrist for its size and doesn’t wear you down.

The crown is engraved with a small MWC logo and flanked by two pump style pushers.

Prominently featured on the case back is a detailed engraving of Melbourne’s Royal Exhibition Building. It’s Australia’s first World Heritage-listed building, and yep, it’s based in Carlton.

I like this. It’s a cool touch that you don’t see on a lot of watches.

Themed elements like this add an interesting story to a watch and from a quality perspective, I welcome the attention to detail.

There’s also the standard information engraved in a circular pattern around the edge which is nice and tasteful.

The case back isn’t plated, presumably to allow you to unscrew it if you want to avoid wear on the neat looking engraving.

Interestingly, the Carlton was originally equipped with a meca-quartz movement. The timekeeping component was quartz while the chonograph component was mechnical. It was certainly quite unique for this price point.

Of course, because the movement on the newer version is now completely quartz chronograph, the main aesthetic difference is you’ll now get the individual tick of the second hand when the chrono timer is on, and the slow wind back on reset, rather than the sweeping motion and snap back you would have previously seen with the mechanical chronograph movement.

My guess is the change is down to cost. A quartz movement is generally less expensive than a meca-quartz. Whether this is a negative for you is really down to whether you have a soft spot for the more analog feel of a mechanical chronograph function.

For me personally, I wouldn’t have really expected the Carlton to have a meca-quartz movement in the first place. Yes, the change does mean it loses some uniqueness factor, but I can look past it for this particular watch at this price point.

It’s worth noting here that both of my Carlton watches have kept perfect time after a week.

The Ronda 5021.D has a standard battery life of 54 months, but this may decrease if you use the chrono often. If you’re like me and you like to nerd out on watch movements, you can find its full spec sheet here.

The chrono minutes totaliser sub-dial at 9 o’clock will tally your minutes up to 30.

As you’d expect, you adjust the date and time by pulling the crown. It’s easy to pull out and functions well mechanically overall.

The Carlton has quite a simple look to the dial with two sub-dials and a date window. I’ve seen some cluttered chronographs in my time, and this isn’t one of them.

The dial on the Classic Rose is a pleasant cream color which contrasts nicely with the rose gold. The Black version has a black dial and side-by-side, definitely has more of an understated look comparatively.

The sub-dial at the nine is a 30-minute chrono timer, while the other is the main seconds hand. The sub-dials have a subtle concentric circular pattern to them which create some interesting reflective effects depending on the lighting.

Above each hour baton is a ball—a cool little feature which is consistent across MWC’s collections. The chrono seconds hand also has the themed “M” logo fixed to the end of it which is another nice branding touch.

The MWC logo and the model name are nicely centered and non-obtrusive.

Lume is sparse on the Carlton, with a small amount on the hour and minute hands. I tested it—it wasn’t the brightest I’d seen but certainly not the dimmest.

All the polished elements for both watches match with the color of their respective case which helps give them that streamlined classic look.

Sitting on top of the dial is a sapphire crystal with anti-reflective coating. The crystal does look stunning and it brings the elegance of the dial to life when you’ve got it in your hands.

The watch has a 50m/5ATM water resistance. You’ll be fine for light submersion. But I wouldn’t go swimming in it. It just ain’t that kind of watch.

The Carlton comes with a leather alligator strap. The color varies depending on the variant you choose. The strap is 22mm at the lugs tapering to 20mm at the buckle.

The buckle has an “M” logo branded onto it. Its color is consistent with the case for each version.

The leather is supple out of the box and feels great on the wrist. It’s a quality band, I must say.

As you’ve probably figured out, I’m a fan of this watch.

There’s clearly been a lot of love and care poured into the design of the watch. It simply has a high quality feel overall, and it all starts when you first open the package.

Personally, I prefer the Classic Rose version with the brown band over the Black.

I’ve always dug the rose gold/cream/brown leather dynamic. I wear brown leather shoes a lot and this probably plays into my bias.

In saying that, both have enjoyed their fair share of wrist time so far.

If you like 60’s chronograph styling and you’re shopping in the $300-350 USD ballpark, you’re getting great bang for your buck with the Carlton.

While it sits quite large, there’s a lot to like about the Carlton by Australian watch maker, Melbourne Watch Company. Its high-quality design and specs offer great value for money, while its themed elements work to creatively bring the city of Melbourne to life, right there on your wrist.

Check Best Price
If you click this link and make a purchase, we earn a commission at no additional cost to you.