Taper vs Fade vs Taper Fade Haircuts: Learn The Difference

Let's cut down on those confused looks from your barber

Heads up: This post contains affiliate links. If you click on a link and make a purchase, we may make a commission at no additional cost to you. What's this?

There are plenty of hairstyles to choose from these days. So many that it’s difficult to decide what to go for.

If you’re not captivated by the spell of the Jon Snow inspired long hair movement, you can’t go too wrong with the tried and trusted fade or taper hairstyle.

Fades and tapers are all the rage these days—and they have been for eons. Both the fade and taper hairstyles provide a clean, crisp look that looks great in both a casual or professional setting.

This is arguably the best thing about these hairstyles. Their versatility.

You can go from boardroom to bar and not look out of place.

But did you know that there are subtle differences between the taper, fade, and taper fade haircuts?

Keep reading and we’ll clear it all up for you.

Taper vs Fade: The Quick Guide

A taper is when your hair gradually changes from long to short from the top of your head down to your hairline. A taper only appears in two areas—your sideburns and your neckline.

A fade is a shorter version of a taper. A fade appears all the way around your head, ends above your natural hairline, and gradually ‘fades’ into your skin.

Fades and tapers are similar because they both reduce the length of your hair to form a gradient. They’re also both achieved by using a clipper, scissors, or often both.

But they’re different because the gradient in a fade happens quicker and usually sits above your hairline.

Here’s a great video which explains the more technical differences between a taper and a fade:

What is a Taper Haircut?

As mentioned above, tapering hair involves reducing its length in a manner that forms a gradient.

The gradient starts with longer hair at the top and leads into short hair closer to the hairline. Tapering is used in most men’s haircuts to some degree, particularly near the base. This is where the haircut ends near the hairline.

Tapering allows for easy management and symmetry of different hairstyles.

A true ‘taper’ leaves quite a fair amount of hair at the top of the head. Typically, it’s around two to four inches, but they can be longer.

Which Pomade is Best for a Taper Hairstyle?

To help style and hold the longer hair on top you’ll need a quality pomade.

We’re liking this pomade by Rocky Mountain Barber Company. It’s water based and so it doesn’t dry out your hair, it holds for 10+ hours, smells great, and you get a lot in a tub. Check it out here: 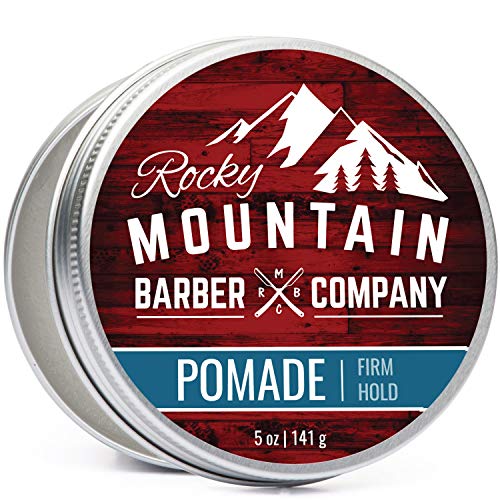 What is a Fade Haircut?

Fades differ from tapers because the hair at the start of the gradient is typically much shorter than that of a taper.

There is a lot more attention to detail used in a fade. Like the name suggests, fade haircuts give the impression of hair fading directly into the skin.

Fades can be different lengths. “Low fades” end very close to the hairline, and “high fades” come to a stop above the ears.

Either way, the fade cut blends the tone of the skin with the hair, giving the appearance of—well, a fade.

Fades are meant to be accurate and smooth, whereas tapers can be more artistic or casual.

Fade cuts are also much more difficult to do at home because of this element of precision.

A post shared by Barberiansbarbershop (@barberians_barbershop) on Nov 2, 2018 at 12:35am PDT

What is the last haircut you gave, or received? ?: @david_blackbird.concept ??

What is a Taper Fade?

The taper fade isn’t actually a style of hair. If you ask your barber for a taper fade, you’ll probably end up with a taper—unless you specify.

Taper fade is just a term that many people use to lump together the fade and the taper hairstyles since they’re so similar.

Technically (and somewhat confusingly), a taper is a form of fade, but a fade is not a form of taper.

As mentioned, if you’re going for a taper, know what type of taper you want.

If your barber isn’t clarifying if you want a low taper, a mid taper, or a high taper, they’re probably not communicating properly.

The same applies if you’re requesting a fade haircut.

Should You Get a Taper or a Fade?

It’s up to you, of course. Both are extremely popular hairstyles that lay the perfect foundation for many more intricate hairstyles.

You can add custom designs to your fades, such as having the fade end with triangles or ‘spikes.’ You can leave the top of your hair untouched and fade the sides.

A bald fade tapers down from the top, leading to completely shaved sides and back of your head. While a faux hawk has long hair in the middle of the head, similar to a Mohawk, but it tapers into a fade on the sides and back.

follow @sickestbarbers ✅☑️✅ By @barber_matt Im grinding harder than ever right now. Only 6 months ago i sat and sat and sat just waiting for walk ins.. for somebody to trust me that i can do good on a haircut.. This is why i cut the way i do! You must leave your mark on everything and take pride in your art. Even if you feel like you need to give a discount just to get a client please dont! Your only playing yourself?Thank God for blessing me with this life i live?? Blessed my guy?? @roycestagram #20yearsold #Barber4life #beard #beardie #baldfade @roycestagram

Time to Fade Out

Both tapers and fades are very versatile and can be worn in pretty much any social or work environment.

Let’s be honest, if the military approves of the fade, most employers won’t have a problem with it.

Tapers and fades are simple yet neat and provide the perfect base for more daring and intricate hairstyles.

They also show that you’re a man who puts effort into your appearance.

And if you’re a long-time reader of this site, you’ll know we think that’s the type of man you should be.

The 12 Most Attractive Hairstyles For Guys That Women Love

What’s The Best Hairstyle For Your Face Shape?

FacebookPinterestTwitter
fadetapertaper fade
BECOME A TAM INSIDER!
Get our most inspiring guides and exclusive discounts. Direct to your inbox.
We don't do spam. Unsubscribe any time.

15 Different Types Of Tie Knots: Mix It Up With These Classic & Fancy Styles

Vincero Watches Review: Are They Any Good?

50 Things Every Man Should Own To Win At Life

The Manscaping Manual: How To Manscape Your Entire Body Safely

Asket Review: Are They The Key to Your Capsule Wardrobe?

7 Best Affordable Watch Brands in 2020: Timepieces Easy on the Wallet