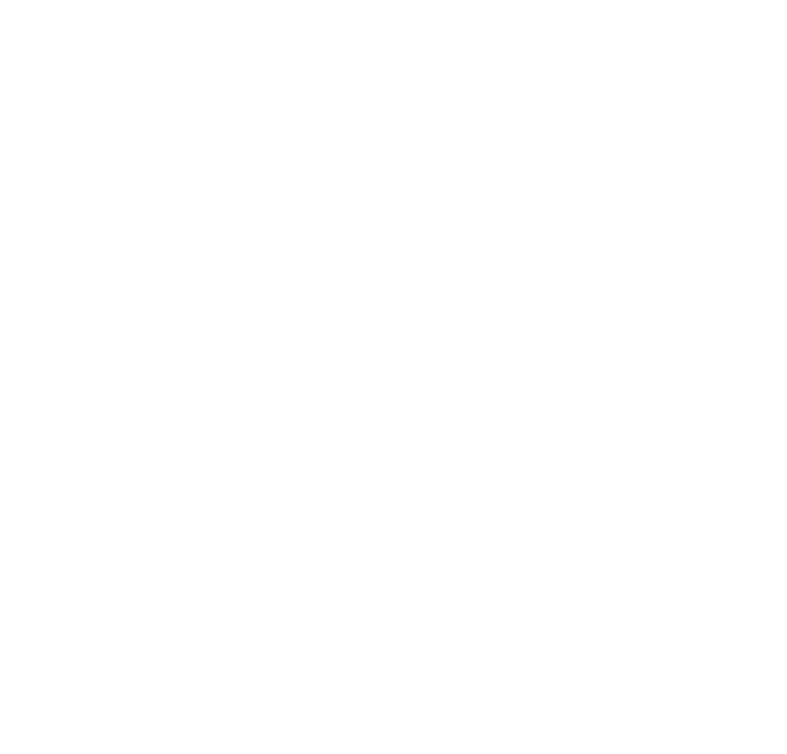 Disclosure: This is a sponsored post. We received compensation and courtesy product from Everlane in exchange for our honest review only. All opinions expressed here are our own.

By William Barton Last updated Jan 9, 2020 We may get a commission for purchases made via our links. Here's why. 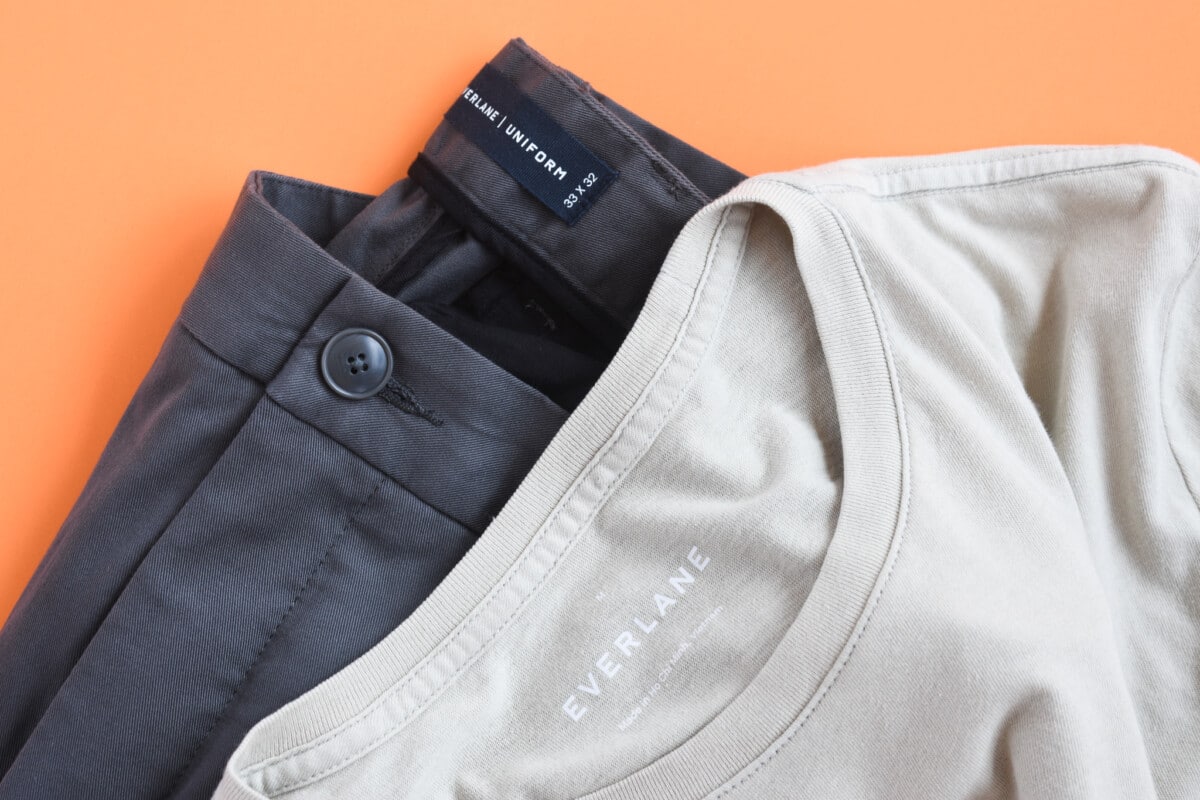 Everlane’s new Uniform line stays consistent with their commitment to simple design, quality construction, and ethical sourcing. While some items fit a bit snug, I expect to have these staples in my wardrobe for years.

Heads up: Everlane promos are rare and so we wanted to make sure you’re across this one:

Everlane is currently running a Choose What You Pay event where you can get up to 65% off a pretty huge range of men’s styles. Check it out now—we’re told it’ll run until they sell out.

I was a teacher for years. My students could tell which day it was by the shirt I wore.

I didn’t have a uniform, per se. But I definitely had a uniform.

Green oxford Monday, blue checked button-down Tuesday, and so on.
Since leaving teaching and getting into a more relaxed workspace, I’ve found myself looking to fill the void in my casual-wear.

I’ve got plenty of nice button-ups for Friday night and Saturday afternoon, but what about the everyday stuff? The t-shirts, the jeans, the jacket—you know, the clothes that get you through the week.

Everlane went ahead and built their own solution to that very problem.

They call it “Uniform.” 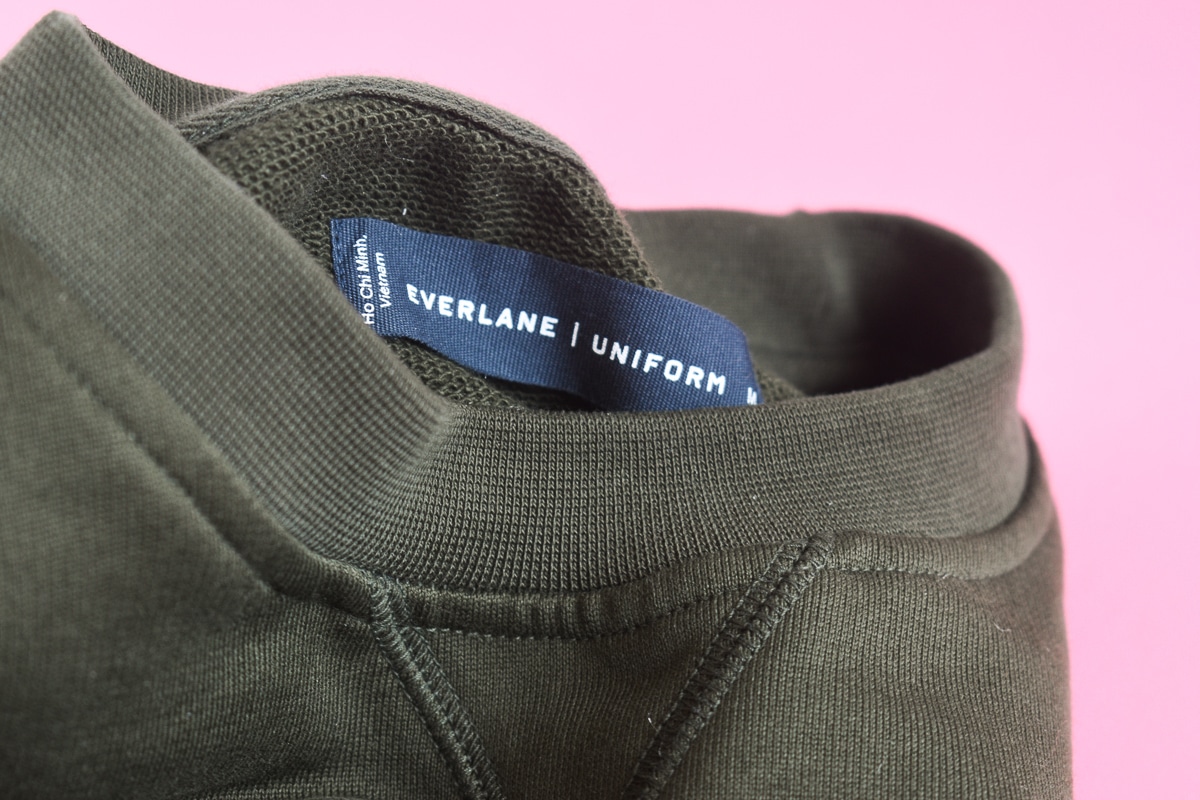 Along with the launch, they made a bold promise.

If any uniform product doesn’t stand up to its first year of wear, Everlane will replace it.

The Uniform line features jeans, chinos, t-shirts, sweaters, coats, and underwear—basically everything you need to build out your casual style. Each piece has been tested over and over again to make sure it lasts beyond a year. 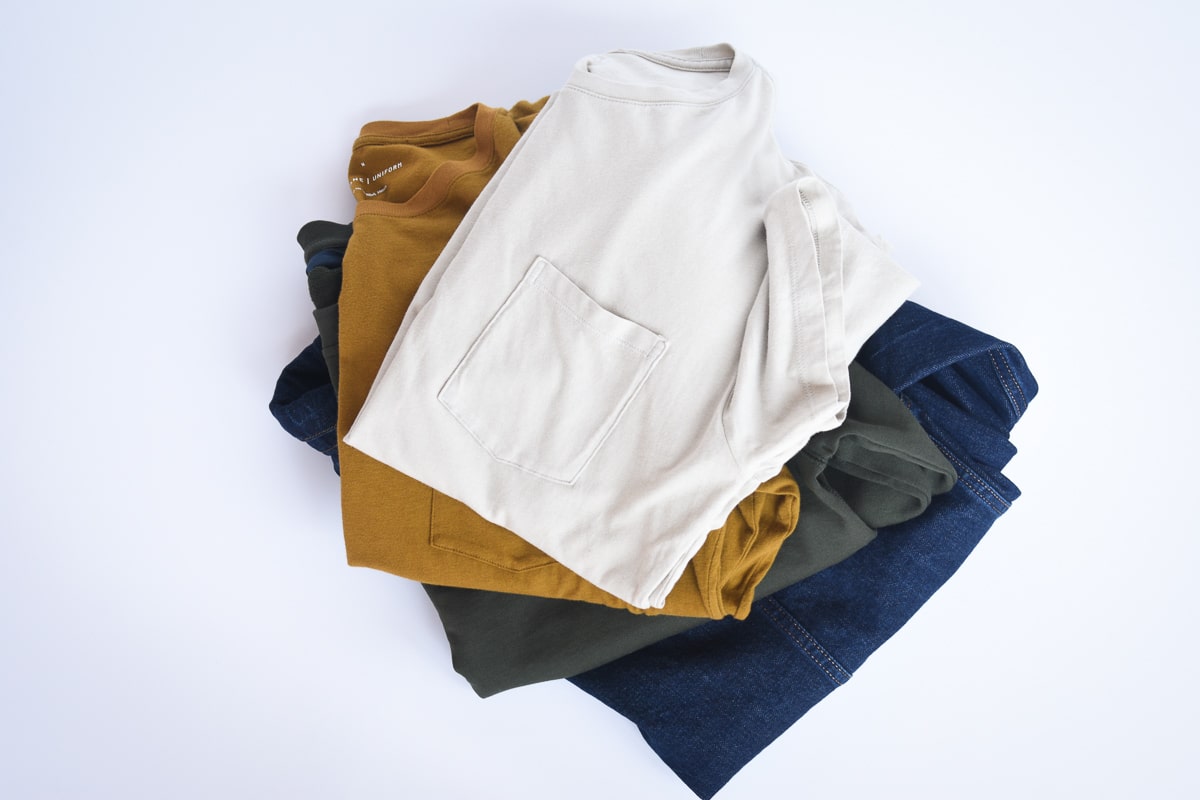 You no longer have to accept that your favorite t-shirt will eventually get bacon collar and die. Each piece of the Uniform line has undergone 50 wash cycles, which is up to 15 times greater than the industry standard.

They’ve checked for fading, tearing, stretching, shrinking—anything that could kill your favorite shirt or pair of jeans.

No more putting your new t-shirt through the wash twice and ending up with a formless fabric amoeba.

As with all Everlane clothes, the Uniform line is ethically produced. They spend months looking for factories that treat employees fairly. Along each step of the production cycle, they’re reducing and offsetting their carbon footprint.

You can even take a peek at the factories that produce each piece of clothing you purchase. With so much clothing produced in an unethical manner, Everlane feels like an easy win. 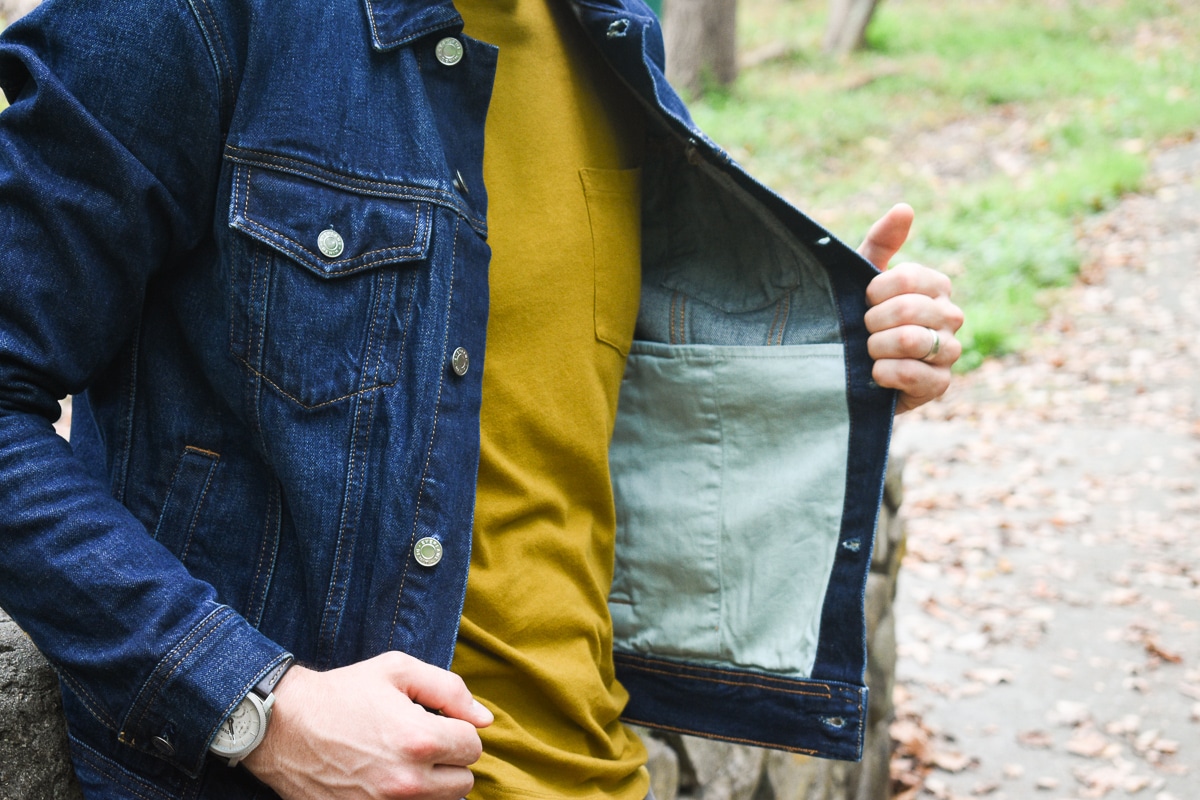 I wanted to get a feel for Everlane’s new Uniform line, so I picked up a range of different pieces. With six of the twelve new items covered, I figured I’d understand the highlights and drawbacks.

Here’s a breakdown of everything I tried:

Here’s what I thought about each piece.

I’ve been looking for a denim jacket for years, but I’ve never been able to find one that was both simply constructed and fit me well.

I’ve been burned before, so I was a bit skeptical as I went to try on Everlane’s version.

I’m between a size medium and large, and I opted for medium. The denim jacket fit me perfectly in the shoulders and arms, and the length was just right. 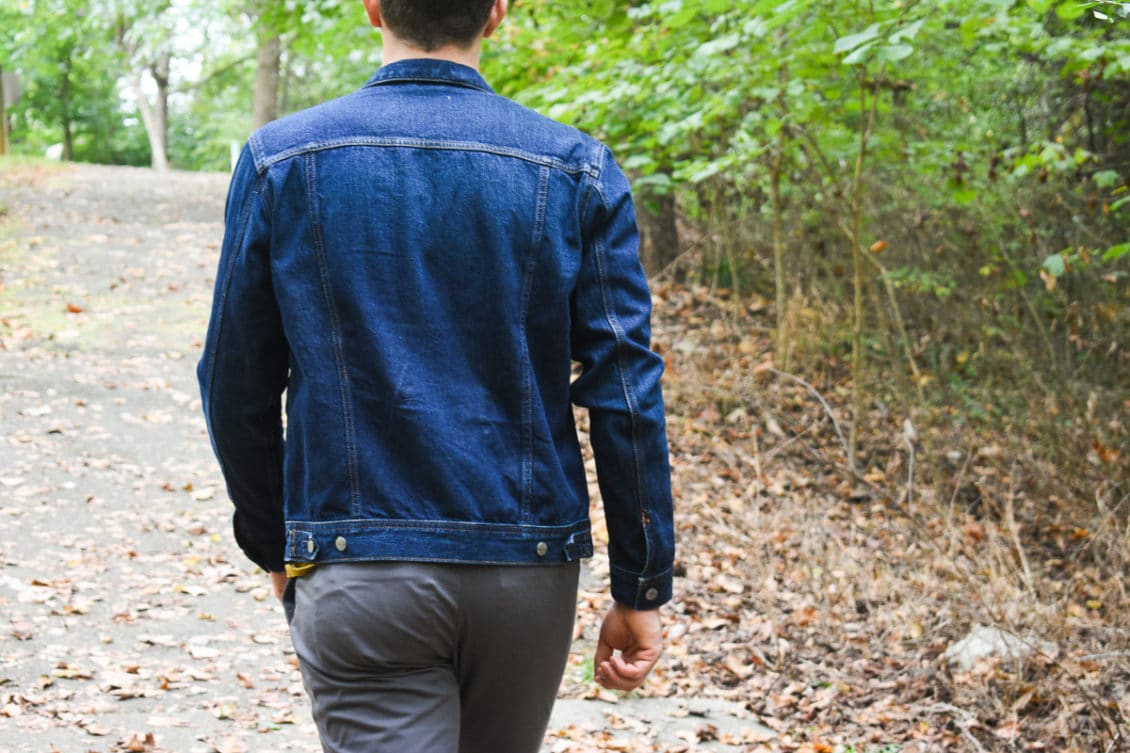 I always knew I’d look good in a denim jacket, but I couldn’t find the right coat to prove it. This is the proof I’ve been searching for this whole time.

Made with 100% 13.5oz Japanese denim, this jacket is heavy enough to keep out the late-fall and early-winter chills. 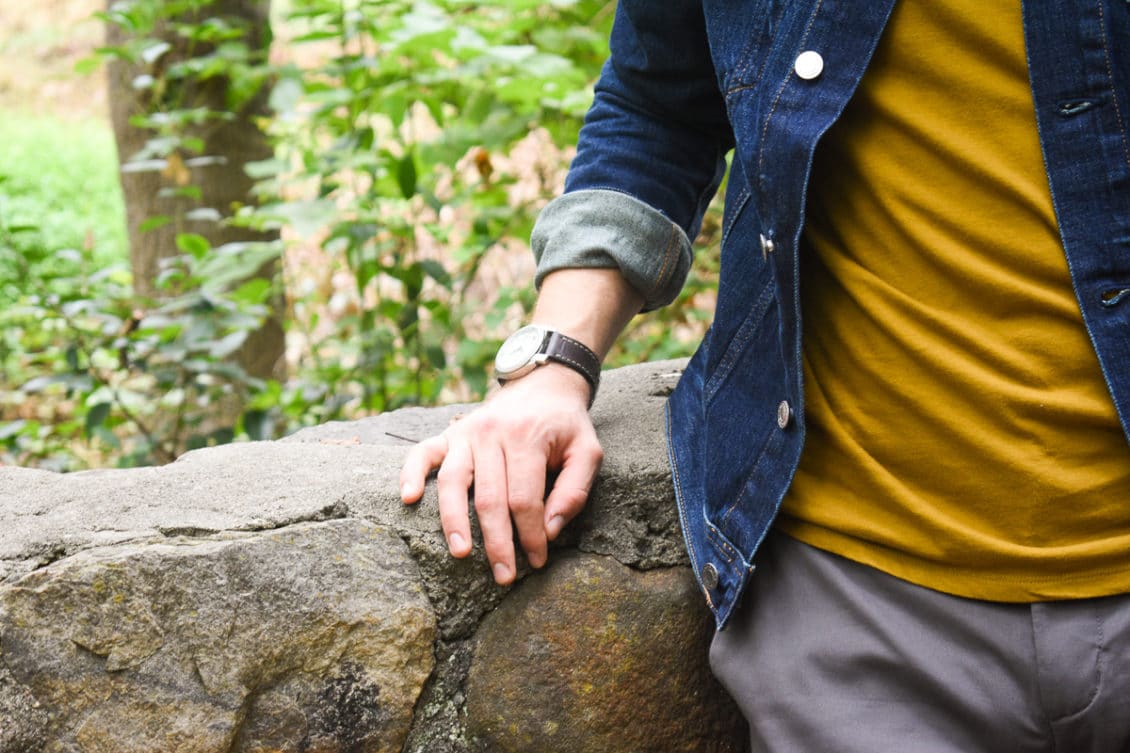 Popping the collar doesn’t quite work for this jacket. I wasn’t able to get the “80’s rock album cover” look, but that actually might be the polar-opposite look they’re designing for.

Reviews online give this jacket a near-perfect 4.89 stars out of over 200 reviews. I guess I’m not the only one whose quest for a great denim jacket ended with Everlane.

Everlane also sent a pair of their Performance Jeans in black.

With some brands, I can wear skinny jeans (rather than slim fit) and get away with it. Everlane is not that brand.

Their clothes fit on the small side, so if you’re in between sizes or between skinny and slim, choose the larger size/ fit. 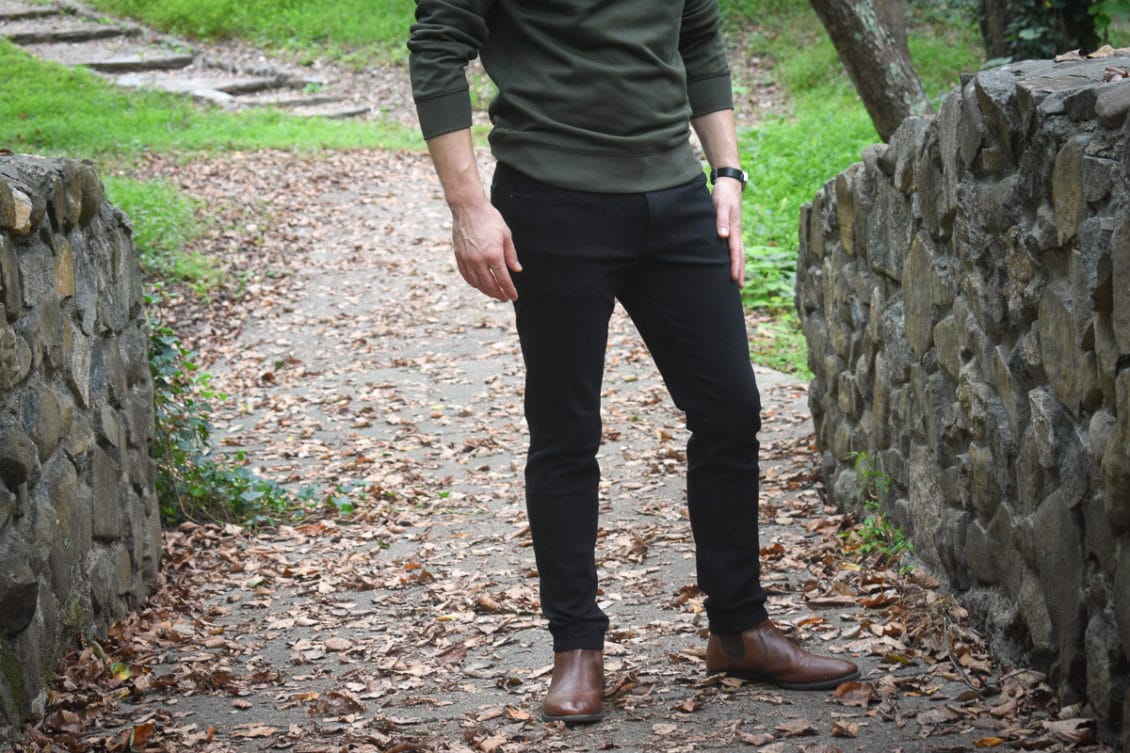 Part of the issue is that my legs respond freakishly well to weighted exercises. If I spend any time at all on the squat-rack, none of my pants fit the same. The skinny jeans were too tight for me around the thighs and backside.

I’ll chalk that one up as my mistake.

However, our model doesn’t quite have the same prolific legs and butt as I do, and he loved the fit. The skinny performance jeans are narrow through the hips and thighs with extra taper in the leg. 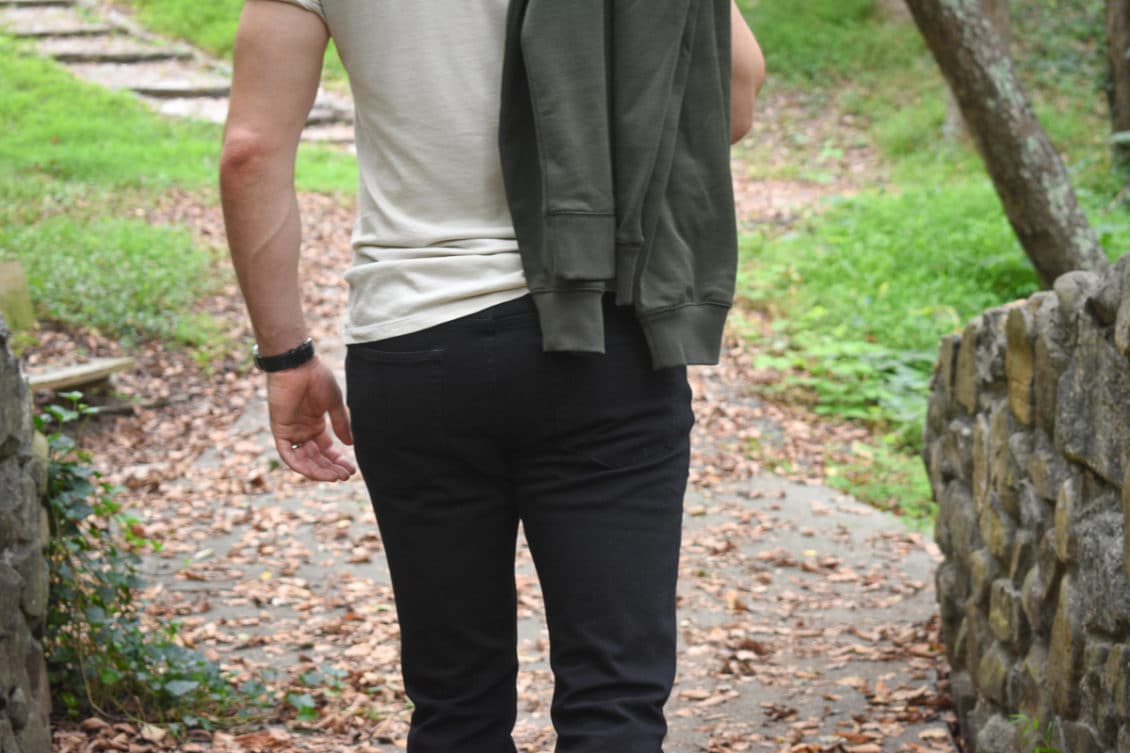 Custom hardware and a simple, sturdy design make these jeans great go-to’s. Made with a bit of polyester and elastane, they stretch so you don’t have to worry about having a major blowout when bending down.

Everlane has also found a way to reduce their water consumption by using a special dyeing process called Indigo Flow. Not only do they use 55% less water, but the wastewater isn’t filled with harmful chemicals. It can be treated and released back to the water table after dyeing.

Just a little something to help you feel good while looking good. 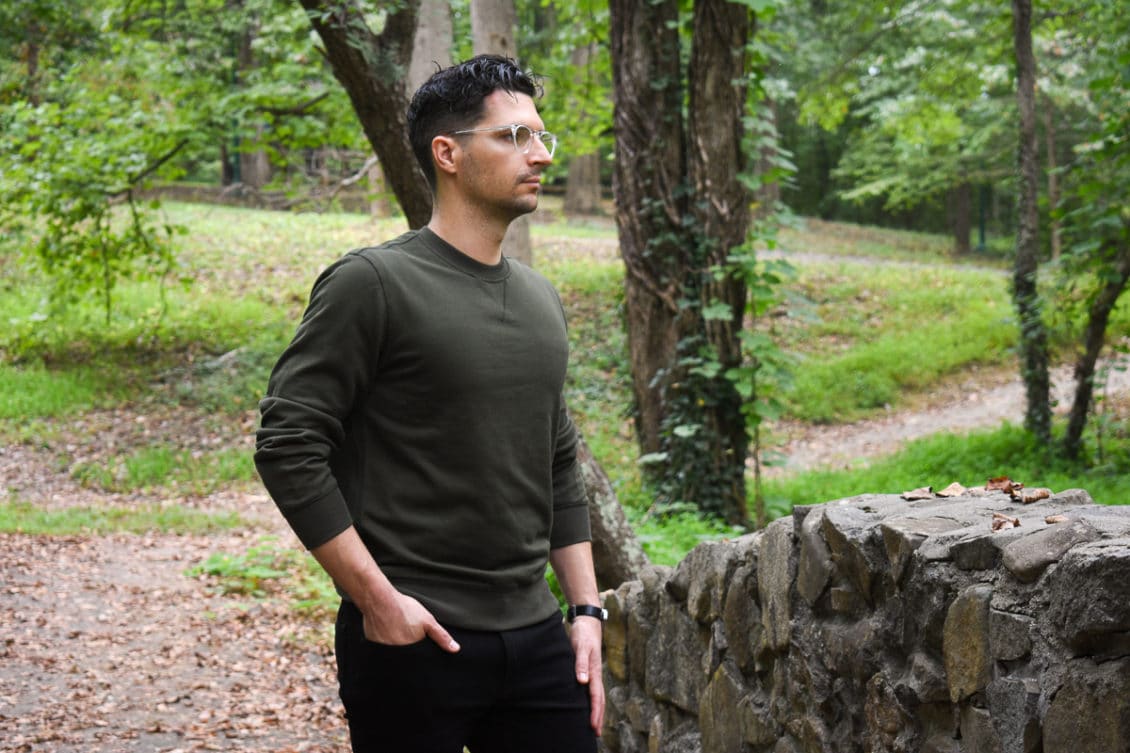 Everlane claims they worked with someone named “Six” to make their French Terry Crew especially durable.

Sorcery or no sorcery, I’m a fan. The shoulders fit well and the lengths and proportions were spot-on. It’s boxy around the torso, but I liked the design. It paired well with both chinos and jeans. 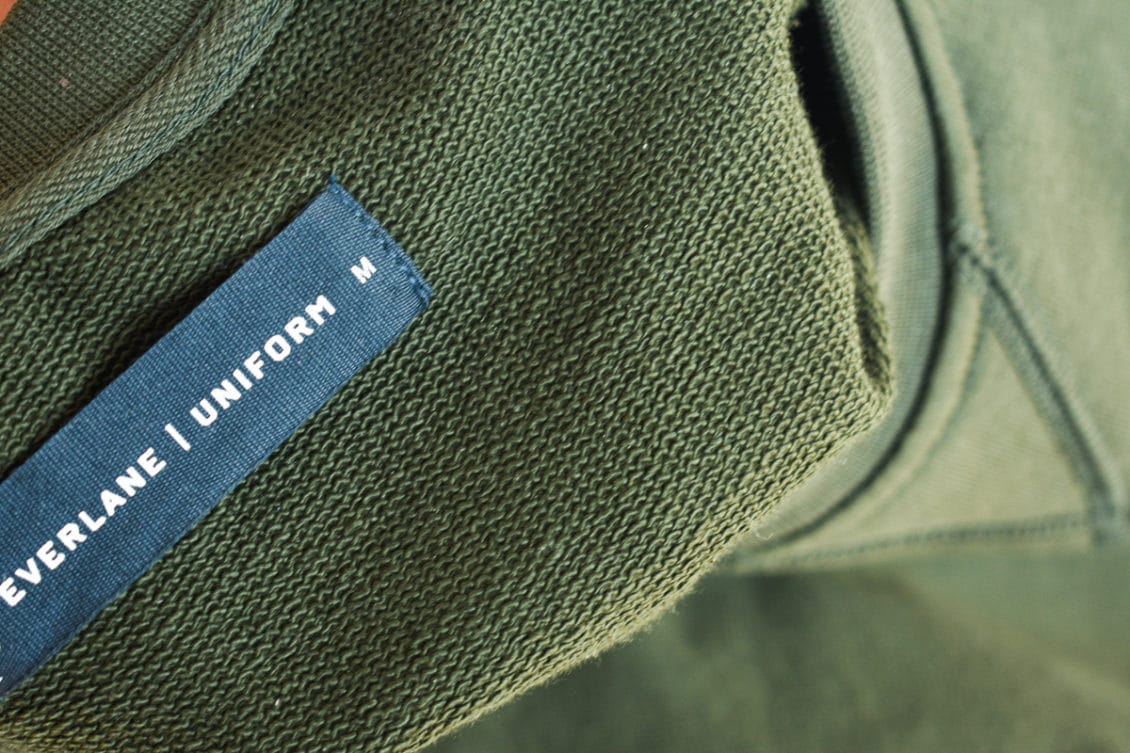 As you can see, the fabric isn’t what they use to make your standard cotton sweatshirt. Terry-cloth is known for its balance of breathability, comfort, and warmth.

The only problem? It breaks down easily. 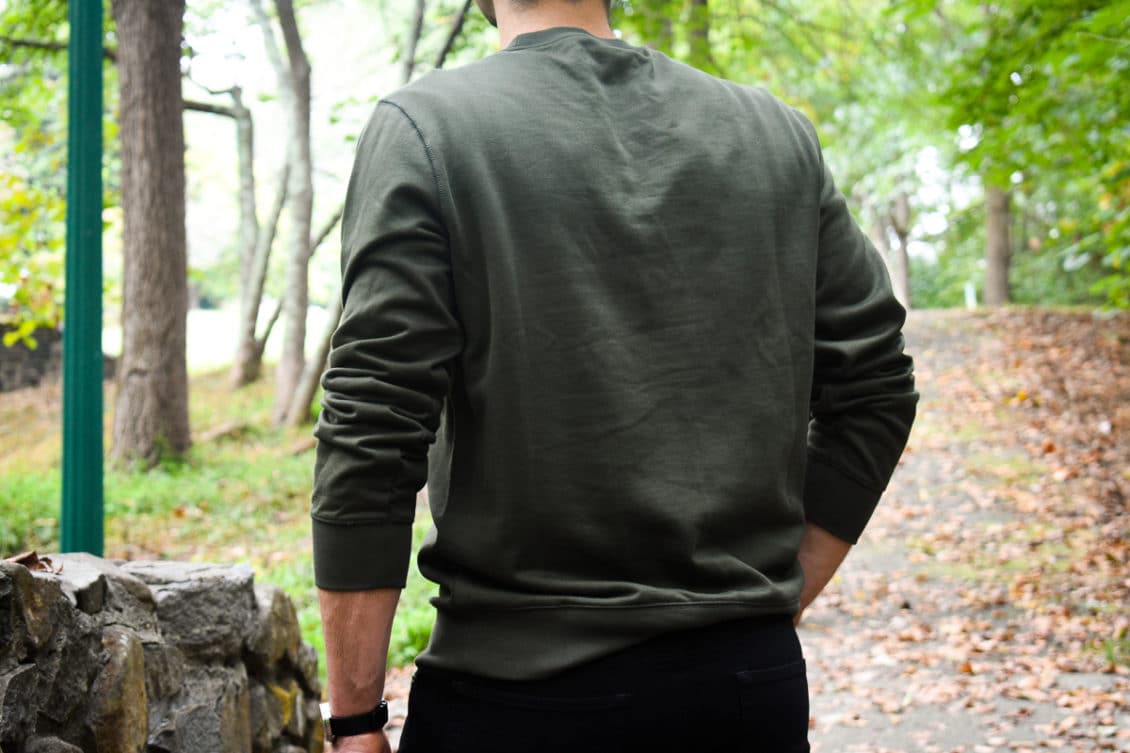 The extra-tight spin Everlane has chosen for their terry-cloth means there’s no annoying pilling after washing. In line with their durability promise, Everlane went the extra-mile here to make sure you’re getting something that’ll last and continue to get more comfortable over time. 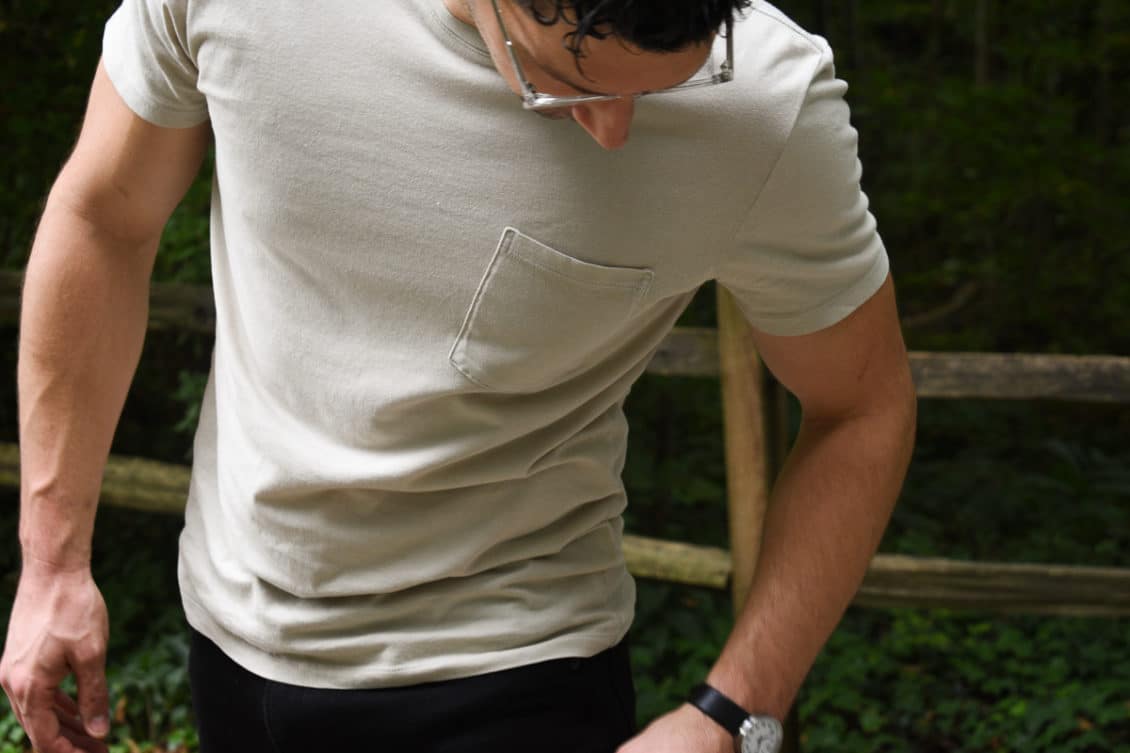 If you want to judge a donut shop, order the apple fritter. It tells you everything you need to know.

If you want to judge an apparel company, order the basic t-shirt.

Everlane carries three types of short-sleeve tees—crew-neck, v-neck, and pocket-crew. I love pocket tees, so I went with my gut.

All Everlane Uniform t-shirts are slim-fit, which I like. Too many shirts have extra fabric around the stomach and flair out, making for an unflattering silhouette. Not so with Everlane.

With a snug fit around the chest and arms, Everlane’s tee had just enough structure to balance its casual nature while still looking put-together. 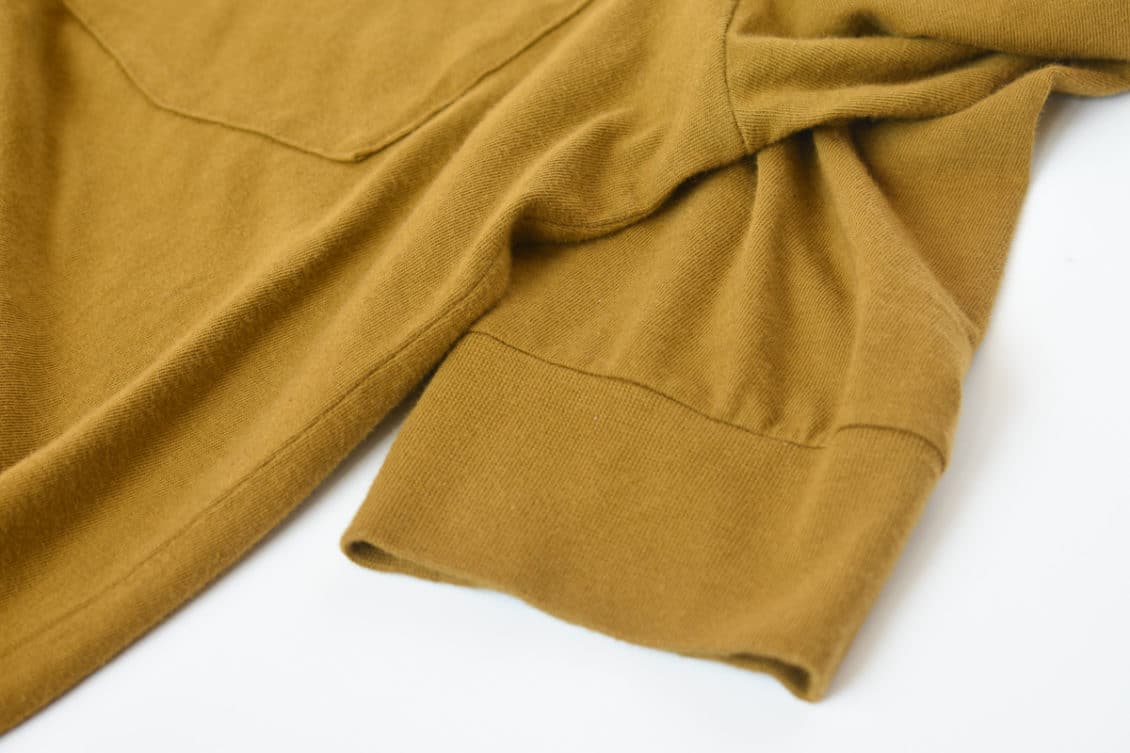 Everlane’s Uniform line also features a long-sleeve version of their cotton pocket tee. There’s no yellow in my closet, but I loved their Brass color so much I figured it was time to change that.

I was worried the color would look different in person, but Everlane’s product photography gives you a true idea of what you’re getting.

The long sleeve is great under the denim jacket or on its own with the sleeves pushed up. I’m 6’1” and around 180 lbs—both medium t-shirts fit well at the shoulders and chest. They were a little tight around the mid-section and I’ll order a size up next time around. 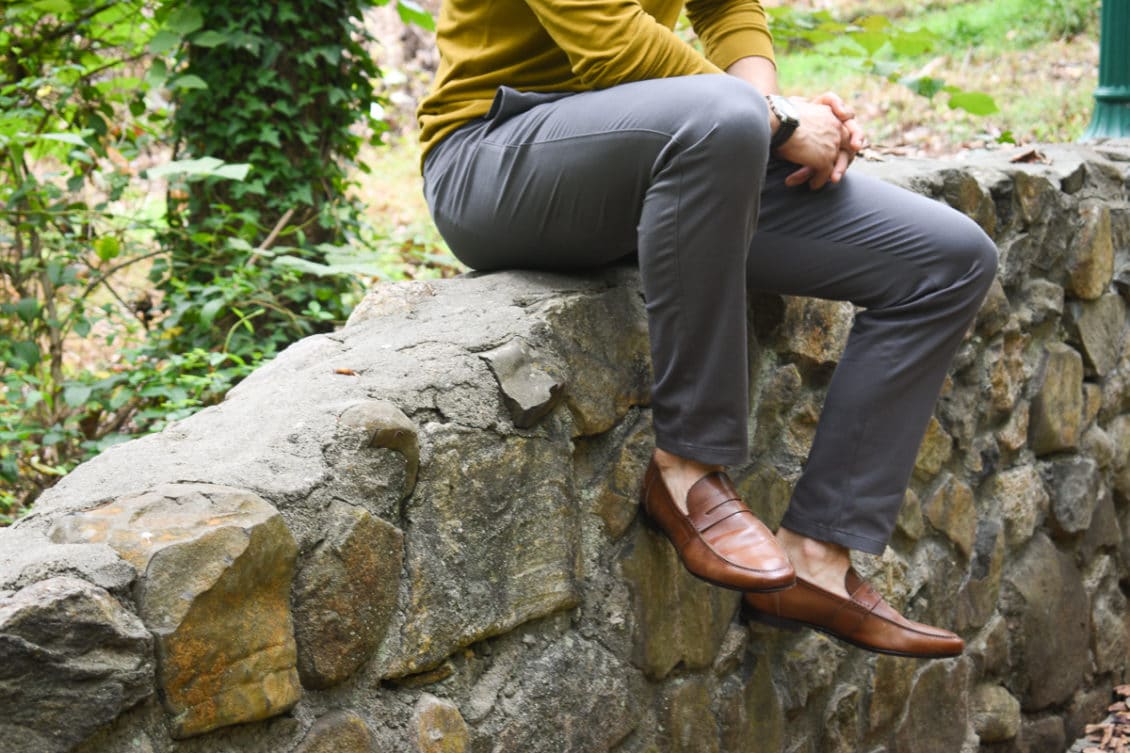 The last item I tried was Everlane’s Performance Chino.

With an average of 4.77 stars out of over 350 reviews, I had to see what made their chino so special. Everlane offers two cuts—slim-fit and athletic-fit, and six color options.

I chose the slim-fit and was happy with the design. A common problem with chinos is that they’re baggy around the backside, which can lead to dreaded pocket-flair. The extra fabric encourages the pockets to stick out like little hip-wings. It’s always the first thing I look for when trying on chinos. 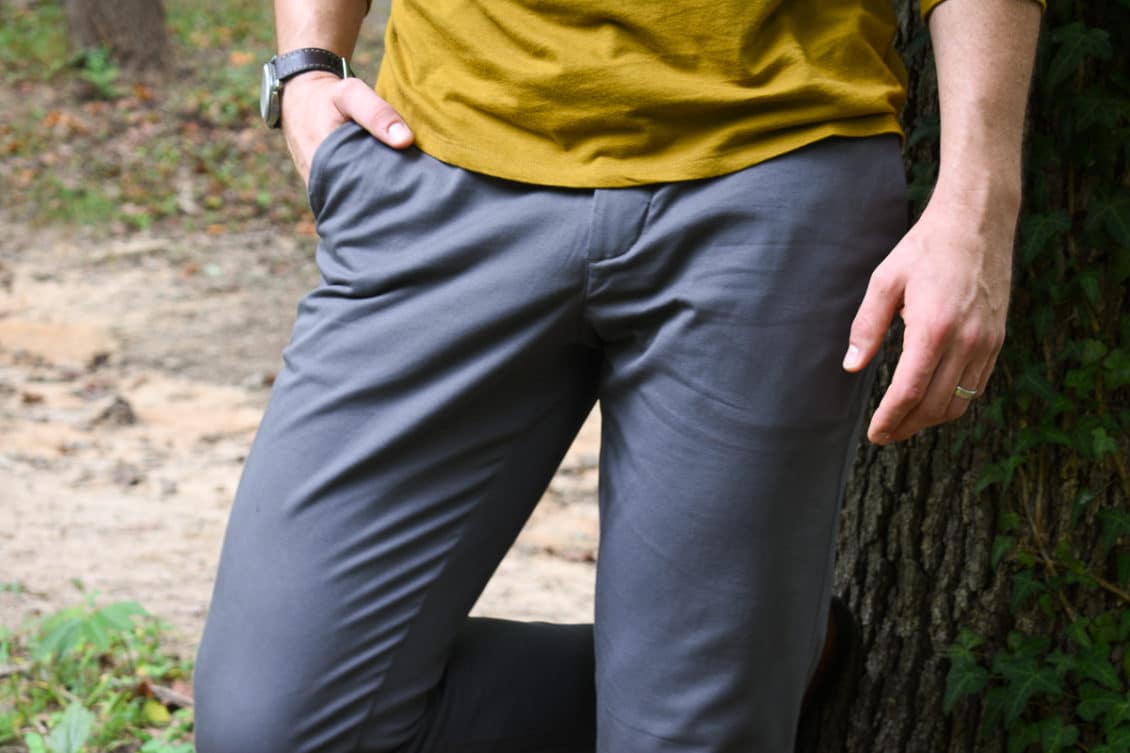 Ta-da—no pocket-flair. Slim through the hip and thigh, I didn’t have any issue with these being too tight even though I have a little more muscle on my legs.

Added elastane gives these pants extra stretch, so they’re more comfortable in everyday situations. I was able to go on a long bike ride around the city while wearing my performance chinos and they never became uncomfortable or constricting

My Overall Thoughts on Everlane’s Uniform

Every piece from Everlane’s Uniform line fits pretty much seamlessly into my wardrobe. The simplicity leads to versatility. And that’s important—especially for basics.

I love having a t-shirt that goes well with whichever pants I choose. And it’s nice having a pair of pants that work with any of my coats.

But what I appreciate most is knowing I’ll have these basics for years to come. I don’t have to buy a new set of shirts year after year.

When you pair the durability and fit of Everlane’s clothes with their commitment to sustainability and transparency, you can’t lose.

Oh, and did I mention that the whole Uniform line is very reasonably priced?

While writing this review, I had to fight the temptation to pick up a few more shirts and another pair of jeans.

Now that we’re at the end, though, I might just give in.

Get ahold of your new favorite basics and start putting Everlane’s 365-day promise to the test now.

Get Everlane In Your Life, Too 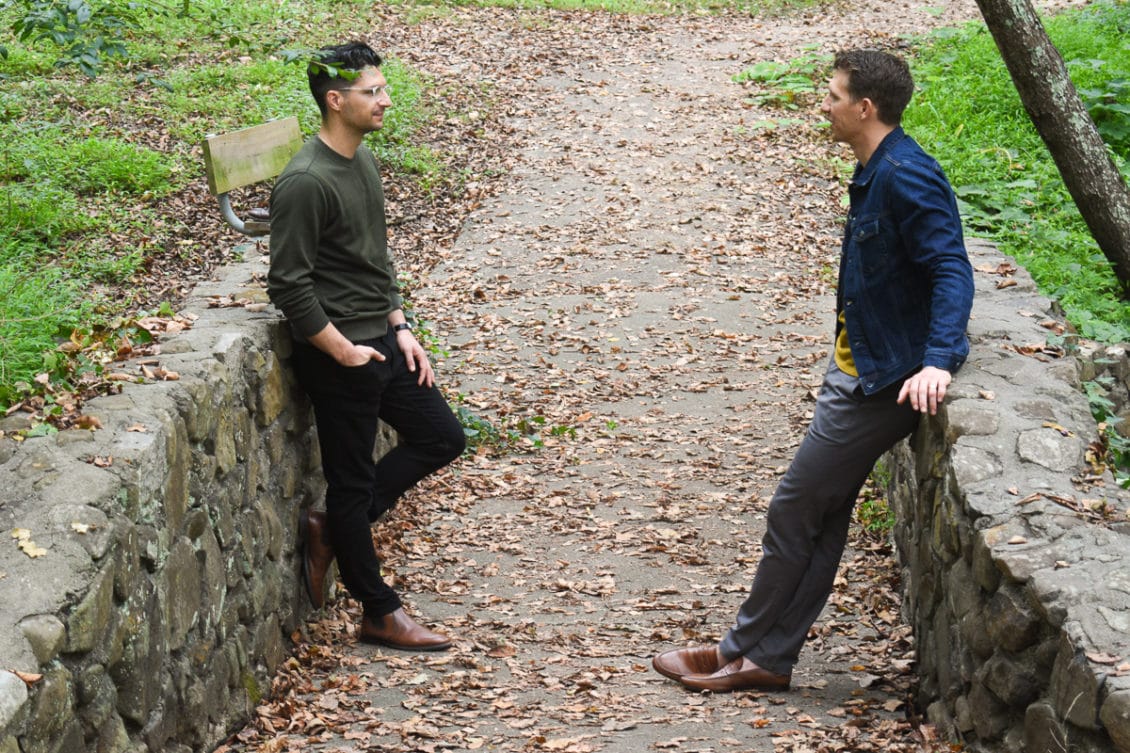 Everlane Review: Because Life Is All About The Essentials

Carhartt Review: The Iconic Workwear That’s Not Just For Work

Paravel Review: The Fold-Up Bag – Does It Live Up To The Hype?

Public Rec Review: Leisurewear You’ll Want To Be Caught Outside In

basicschinochinosdenimessentialsEverlanejacketsmen's basics
Share
BECOME A TAM INSIDER!
Get our most inspiring guides and exclusive discounts. Direct to your inbox.
We don't do spam. Unsubscribe any time.

What to Wear with Dark Blue Jeans: 5 Killer Outfits

Pair of Thieves Review: In Pursuit of Fun and Better Men’s Basics